September 22, 2010
My friend Sadie and I finally got together to do a work/art share—a sort of lovely storm of ideas, all flickering between us. She visited me at the LightHouse for the Blind as I was finishing up my work day and I told her about our Braille map projects and the talking BART maps with the speaking pen, which are underway. The, over coffee, I filled her in on the beginnings of my freelance work, Write To Connect.
Sadie is currently artist-in-residence at Oakland Children’s Hospital. In addition, she is leading workshops for high schoolers at Zeum Children's Museum in . The Zeum project involves taking kids in underserved areas of the city like The Bayview and The Tenderloin and having them first, give a tour of their own neighborhoods and then, make their own maps. The map becomes a rendering of their neighborhood and how it reads to them. This means designating and depicting, in words or images or audio, their own unique landmarks. Sadie wants to incorporate in the exhibit some of the alternative format maps like the Braille and audio maps that the LightHouse is currently producing. This is her way of including the story of how youth with sensory differences experience/map out their city.
Mostly we laughed about our obsessive processes, the ones that make us who we are. We spend less time getting around to making art, providing service, or producing new writing and more time enacting the rituals that make us feel alive and connected—like sorting through photos after a trip, tidying our work space, arranging pens and pencils, exchanging ideas!
In her visual art, Sadie has used words collaged from notes in her hospital chart (during her stay in a trauma unit after severe burns) to create a map of her story and to open doors to other stories, for other people. 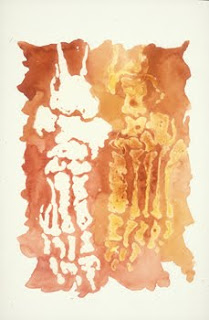 Check out more of her images at http://www.sadiewilcox.com
I want to try a Write To Connect experiment a la Sadie in which I ask participants to make a body map and overlay it with a map of the city or the sidewalk or the house or the room in which the body moves about. Make a map also of one’s body being seen and the body registering itself—on the wheelchair lift, in the X-ray room, in between the bed and the ground, in the light-filled corridor, racing up and down the hill on a bus, the stinging and crunching body or the smooth and singing body.