Showing posts from May, 2012
Show all

May 25, 2012
Excited to see my friend Neil's new experiment: Special Effects Stephen Lichty & Neil Marcus Sunday, June 3 2012 11:00am - 1:00pm 351 Shotwell Street, San Francisco ODC Dance Commons In their first public collaboration, Stephen Lichty and Neil Marcus will negotiate dystonic movements to become sculpture; dystonia is a neurological disorder characterized by involuntary movement and corresponding mental intensities. At ODC, the artists will be working with and against their natural tendencies by directing those intensities around and between their bodies, minds, to objects and back at the space itself.  Stephen Lichty (b. 1983) lives and works in Brooklyn, New York. Recent projects and exhibitions include, Harlan, Laracuente, Lichty / Earth, New Capital, Chicago, 2012; The Museum Problem, Frutta, Rome, 2012; Bauer. Croxson, Lichty. Wood. Foxy Production, New York, 2012; Ribbon dance in a thunderstorm at sunset, Socrates Sculpture Park, New York, 2011; Enchanted, Res
Read more 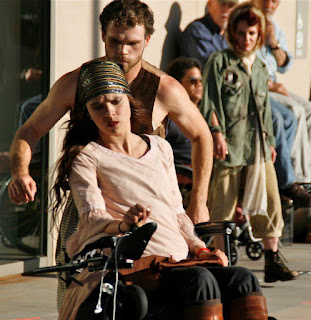 “no sensation on skin” “no movement” “…do you remember” “no reflex on knees” These quotes, I imagine, were spoken by a  doctor  at the time of cervical cord injury, They are an intro into  Cristina  Carrasquillo's return to blogging. Cristina wrote to me today to say she has started to blog again. A dancer with  quadriplegia , a social  justice  activist--Cristina is a vibrant figure in the disability arts community. Read her blog at  cristinamaria.wordpress.com . And, check out an article I wrote about her at Proyecto Vision        [Photo by Zoe Christopher] I like the way Cristina  uses quotes from her lived experience to begin blogging  again . This is what I would call  documentary   poetics . If you are interested in working with the  documents  of your life  (medical jargon, emails, pivotal words at major life events), please contact me about a Write To Connect class. I can work with you to shape your memories and documents into something new or, into an a
Read more
More posts