October 18, 2010
On Thursday night, I went to Writing Our Mind, Speaking Our Word, Telling Our Stories at the San Francisco Public Library. This was a reading by several members of Fabled Asp—a collective dedicated to telling and archiving stories of disabled lesbians.
From their website:

Disabled lesbians have accomplished an impressive amount in the span of 40  years. They spearheaded activism about issues of disability in the women’s community. They were founders of major disability organizations and were at the forefront of activism around federal access legislation.

The event was one in a series held at the library as part of the Fabled Asp anniversary exhibit.  You can view memorabilia, handmade objects, video and texts on the 6th floor through November. 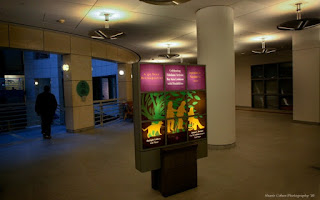 [Caption: This image is a silhouette of three women—one in a wheelchair, another using a cane and holding on to the back of the chair and a third with her guide dog, holding on to the shoulder of the woman with the cane. The image comes from a photo taken of three of the founders of Fabled Asp, raccously crossing the Muni tracks to get to a nearby café. In those days, the women said, it was rare to see disabled people traveling in groups.]
There was quite a turn-out at S FPL for the event. This was no small feat, considering the reading happened so soon after Litquake and with another big to-do—Dave Eggers in conversation with Beth Lisick—going on in the next room. At least a dozen woman, with various disabilities or illnesses, got up to read.
Elana Dykewoman read from a piece called Poem for the Protection of My Loved Ones. In it, she addresses a friend on the night before the friend is to have a major surgery. She conveys friend and reader from the sterile hospital corridor to a hike that she and her friend recently went on. In the cold, oppressive hospital hallway, there appears a small pallet of golden cattails, with all the blue and soft reds of northern hills trailing in around it. Here lies her friend as she waits for her surgery—and there is safety and vitality infused into the space of medical anxiety.
Teya Schaffer read from a suite of poems about her lover Jackie Winnow, a well known local activist who died of cancer. In one poem, she recreates the scene when they made their feelings known to each other, over a plate of veggie tempura. There is much fluttering and clinking, giddy embarrassment. And the only way Schaffer can express herself to her love is to say “Birds in the air/Stars in the sky”.  The poem advances and sworls around the refrain “Dust of the dead” before finally coming to rest on Schaffer addressing her writing students, “Today’s lesson/fragments/Birds in the air/Stars in the sky.”