November 14, 2010
Conversation bounced from National Library Service for the Blind narrators’ voices (not hot—depending on how bored they sound I’m guessing) versus Jeremy Irons reading Lolita (hot—depending on what you are into).Humbert Humbert, Garcia Marquez, eye surgeons requesting that you keep a journal after an experimental ophthalmologic procedure—Aug 1, Itchy. Aug, 2, Very itchy—, to Belo’s encounter with Braille graffiti (“This bump is for you” was tagged on a bench in . Since most of the folks in class 3  were visually impaired, I asked for some help brainstorming as to how I would lead a class that focused on scrap booking and collaging in one’s journal—how could I make that accessible AND applicable to blind people in class? Belo shared his experience with teaching the graphic novel Mouse as a student teacher at Cappuccino High--after he lost vision.
My friend Leah Gardner, spoken word poet and adaptive tech trainer, joined us. This meant a lot to me, since I know meditation is not her thing (Leah, you had to pick the day we did the circuit!), but she really got into the writing exercise. She delivered a ferocious poem in favor of gay marriage and got feedback from the other students about where she should or should not make edits.
I asked everyone how they did with Julia Cameron’s Morning Pages. Last week, at the end of class, I had given them a handout on this famous journaling practice and told them to consider following it in their own journals. The consensus, for this group, seemed to be—well, we are just not morning people. But some kind of daily writes is important. Occasionally, the tech gets in the way. Melissa and I had a side discussion about the efficacy of the iPad for girls like us, with mobility impairments.
Leah posed a question about how social media has changed the way people keep (or do not keep) journals and even blogs. In some ways, social media seems to detract from a journaling practice, but in other ways, it makes daily writers out of all of us. Leah was a prodigious Livejournaler for a while, but now she uses Facebook almost exclusively. She said, “On Facebook, all these different friends from various parts of my life come together”. She added that the “interaction level” is what makes it crucial to her. Melissa shared a new installment from her story about a love affair. This part focused on how the couple met via words, in cyberspace. (Read it below) This discussion really reminded me that social media is a powerful tool for people with disabilities. 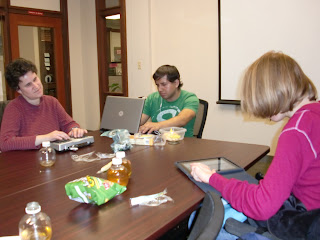 Belo shared a passage from his memoir. He captured the anxiety and then the rhythm of learning to walk with a guide dog after being accustomed to navigating alone with a white cane. His agent is busy shopping the memoir around. Kacie enthralled us with a kind of instructions-poem called “Finder’s List”. Derek was not able to join us, but he sent us his weather report. (Jennifers, we missed you!) Certain pieces are in response to in-class writing prompts from the last two weeks. These experiments were often a kind of mash-up, an exercise in two or three parts, peeling back the weather, somatizing facts and other stuff. (Want to know more about these writing experiments? Come to the last WTC class in this series—November 19, 2010. Contact me for details.)
11.05.2010 Always Take the Weather With You.
Weatherless
I don't know why I can't remember
the weather from yesterday
I went to work
I went to school
I even snuck a date between the two
My day was weatherless
--Belo Cipriani
The time is 4:40pm. Currently, it’s partly cloudy in the mind's eye as intermittent rays of self-confidence and worth pierce gently through the hovering clouds of ambivalence below. This mental map-up is brought to you by reassuring warmth of fellow writers internalizing the external as the clock continues to tick. It's 4:42pm.
Forecast for tonight sees a drop in temperatures as mood swings from a lover bring a 45 percent chance of rampant conflict, exuberant joy and absolute dejection from the work force that leaves her in a fog.
We can expect to see sprinkles of free-time gobbled up by a torrent of cooking madness followed by rising temperatures internally as she offers thanks with a warm embrace. The time is 4:47pm.
As for our Accu-Weather system upgrade, we are pleased to report the previous concerns of a free-form writing session has been downgraded from a "blogging warning" to simply just a "blogging watch." Remember in case of an actual blogging storm to seek shelter in the comfort of TV episodes available online. Remember again to continue watching video until the fear of the blogging storm dissipates and creative impulses go numb. Back to you.
--Derek Zarda
11.12.2010 Feeling the Facts experiment.
Amber asked us to write about facts and what makes something factual. I was not sure how to address this, but I came up with a bunch of jabbering that she wanted me to post.
Facts seem so subjective for the most part. As a baseball fan, I was listening to a radio program yesterday about various player statistics. Nobody could agree, despite tons of stats, what the best moves in terms of player procurement would be for the Red Sox during the off season. All these numbers about batting average and on base percentage and tons of different ways of interpreting them and no consensus.

Yes, it is a fact that I whistle in the shower. But is it a fact that it's irritating, or is it just annoying to the two people I live with? I think both my housemates can sing circles around most people, but is this a fact or just my opinion?

Years ago, on New Year's Eve, some friends and I attended a First Night event. It was a storytelling hour based on a Native American icon in the community. My friends and I were feeling boisterous and crude. One friend had wanted to go to this event, and the rest of us wanted to go to something more exciting. So, we were loud and it took us a while to calm down. At some point, somebody in the room not associated with my group loudly passed gas. We burst in to hysterics. We learned a little later that this was a memorial for this Native American; he was supposed to host the event himself, but he had died a few weeks previously. So, what is fact? I suspect everybody in the room thought we were an obnoxious gang of insensitive assholes, but we didn't know he had died, so what is the truth here? As in all situations, I guess it depends who you ask.