July 30, 2011
Today, W2 and Greeta Ahart--LightHouse for the Blind Braille transcriptionist and audio-tactile map maker--drove to Napa to doa workshop with blind and low vision teens at Enchanted Hills Camp.

Greeta is also a drama teacher and a thespian, so we combined my W2C practices with her Judging Fences technique--a way to get people to embody their hopes and fears and act them out as skits. The teens were really enthused. Ranging in age form 17 - 21, they sprawled on  mats and settled in for meditation and then a writing session. The theme was around relationships, openings and closings, and how to go beyond perceived or self-created fences. I shared a personal story about a date I was recently on and read aloud an ee. cummings poem that the date had sent me.

Some the teens wrote about their girlfriends or boyfriends, others expressed their excitement in having come to camp and made blind friends like themselves. A few discussed their job aspirations, while others talked about cultural stereotypes that they face as Hispanic and Muslim youth. 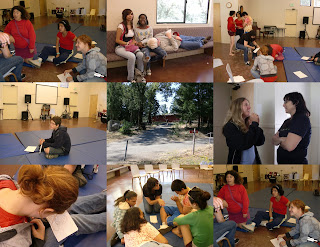 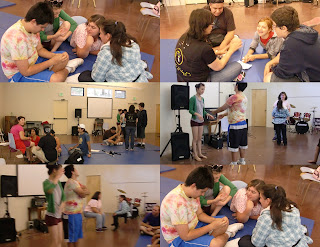 Then, it was time to gather into small groups, take their journal entries and find way to weave them together with the words of their peers to make collaborative mini-plays.

The skits were awesome. Amid the loud base coming from the adjoining radio studio (EHC has  a radio station that extends throughout the camp), the kids really gave the exercise their full presence. All the plays were fictions based on the kids' lives--a job interview gone awry when the words "visually impaired' were uttered, a parent-teen drama and a school crush scenario played out before us with much giggling and lots of unexpected earnestness.

Here are some photos, including shots of me, Greeta, and camp counselor Courtney Mazzola getting our after-wrokshop horse-pets. 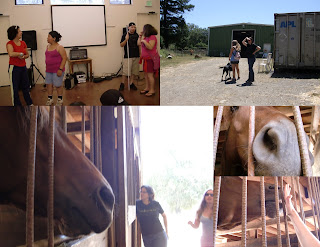 Check out W2C on Facebook to see videos of the kids performing.